Finding your Loved One

Finding your departed loved one on MonumentalTribute.com is very easy.

Simply use our search facility below to find them. Enter as much as you know but don't go over board, start with their name, this often is enough. However if your results bring up numerous entries, add either the year they were born, or died and this will often bring up your loved one.

With MonumentalTribute.com it means that your loved one will be in the hearts of friends, family and future generations for years to come wherever they might be.

Search for a Loved One

A New Century of Service
At Bailey Monument and Vault Company

In 1908, Mr. M.W. Bailey established Bailey Marble and Granite Works in Waycross, Georgia. The original site for Bailey Monument Co., was on Albany Avenue and remained there for 44 years. In 1947 his son, James N. Bailey would be handed the reigns and would eventually relocate the business to a site on Minnesota Avenue where he could expand the facilities to better meet the growing needs of the communities he served. 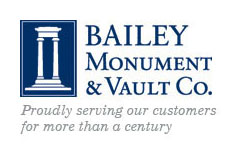 Bailey Monument Co., celebrated its’ 100th anniversary in 2008 with Mr. James N. Bailey continuing not only the tradition of excellence that he had delivered for almost 60 years, but the tradition of family as well. In July of that year, Mr. Bailey continued his legacy by announcing new ownership in the hands of his daughter, Mary Bailey Hawthorne and her husband, Keith Hawthorne.

Mary and Keith are both graduates of Georgia Tech receiving Industrial Management, Engineering and Architecture degrees. “They bring an impressive combination of education and experience to our business. I have the utmost confidence that I am leaving Bailey Monument Company well-positioned for continued success.  Our leadership has never been stronger and our ‘TRADITION OF SERVICE’ will remain the focus for the next generation” stated Mr. Bailey. “It’s the right decision at the right time”.